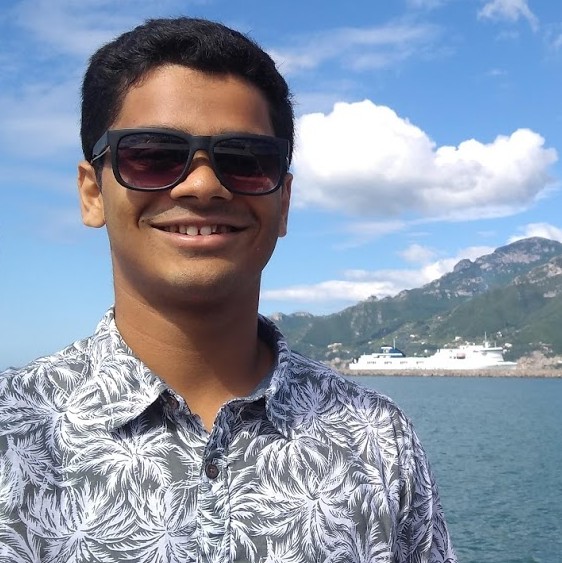 Delhi tower: “ifly 496, winds 280 at 10 knots, runway 29, cleared for takeoff, fly runway heading, departure on 128.75.”
PF (pilot flying): “I have control”
PNF: “you have control”
PNF (pilot not flying): “Roger, winds 280 @ 10, cleared for takeoff, will fly runway heading.”
PF (pilot flying): “set takeoff thrust”
PNF: sets N1 to 40%, waits for the engines to spool up, and then advances the levers to a derated takeoff thrust of 92%. “takeoff thrust set.”
(The engines scream in response)
PF: grasps the throttle with one hand, and pushes forward on the yoke with the other. “check.”
PNF: “airspeed alive” (In about a second)
PNF: “80knots”
PF: “check”
(In about 3-5 seconds)
PNF: “V1”
PF: removes his hand from the throttle quadrant and places it on the yoke, signalling that they can’t abort the takeoff now. “check.”
PNF: “rotate”
PF: gently pulls back on the yoke and holds the plane at 10deg nose up
(The plane gently lifts off)
PNF: “positive rate”
PF: “gear up”
PNF: reaches forward for the landing gear lever and pulls it out and then raises it
PF: “flaps 1”
PNF: sets flaps to 1 and turns off the retractable landing lights. “Delhi tower, ifly 496 is airborne”
Delhi tower: “ifly 496, switch to departure, good day”
PNF: “switching to departure, thanks!”
PF: “flaps up”
PNF: raises the flaps and the slats, pulls on the landing gear lever and sets it to off, Reaches up ahead and sets the engine ignition switches to OFF for both the engines and finally turns the autobrake knob to off.
PF: “after takeoff checklist please.”

A routine takeoff in a boeing 737-800 works like this. Two (wo)men take responsibility for over 250 souls on board and thrust a 79 tonne machine up to 10 kilometres above sea level. Utmost discipline, intellect, alertness and attention to detail is what it takes to say the three magic words. “I have control”.

As we enter cruise at flight level 350, the in flight service starts and people are already asking themselves, are we there yet? Meanwhile, the pilot flying is checking the weather above and below the cruise level to see if there is a tailwind. He knows that while flying higher saves fuel, a given indicated airspeed at that altitude translates to a lower total airspeed and hence a lower ground speed.

And then there is the coffin corner for the airspeed! Flying higher means you gotta fly faster to keep the plane from dropping like a dead bird. Someone has to make this tradeoff every hour, while the pilot not flying is switching back and forth between the radar controllers on the ground. Oh but don’t forget calculating the fuel burn and checking the estimates. This is the easy part. Factor in traffic, weather, equipment failures, and that is how the easiest phase of flight (cruise) looks like. After all, you got to earn that view!

I sit in awe, looking at the flaps being lowered to 30 degrees for landing , moving in unison with the leading edge flaps or slats. The right aileron moving down and the plane rolling left, in response. Spoilers are raised, standing tall and disrupting the laminar flow over the smooth wings. The plane drops quickly, breaks through the clouds and I am in a new country. The sound of air rushing past the fuselage intensifies and I hear the gear assembly falling down. As we make a left turn from base to final, I hear a faint siren from the cockpit, three times. The autopilot is disengaged, and I am sure. He is in control.

This postulate from evolutionary biology has hit me time and again, each time following a “Eureka!” moment in completely unrelated situations. I believe it i...

I opened my dry eyes and gazed out of the window. The faint break of dawn was burning my eyes red as I lowered my gaze. The first rays of the day gave shape ...